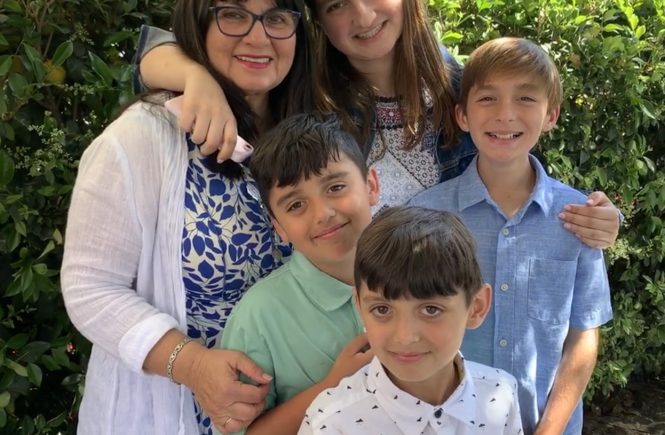 15 and that from childhood you have known the Holy Scriptures, which are able to make you wise for salvation through faith which is in Christ Jesus.

I knew I was in trouble when agreeing to add another day to caring for two of my grandsons. Don’t get me wrong, I love all of my grandkids, but finding things to occupy their days has made for a summer of adventure.

So far they have participated in a science camp, learning to build a robot. When I picked them up from the camp they said a kid was bullying them. Jacob said, “Grandma, this kid said that I attract mosquitos, and I even took a shower today!” Lucas claimed the same kid kicked him in the head. I told the boys to point out the bully, and that I would wait in the bushes and attack him. Then we just laughed it off.

They only attended one art class. This class was a freebee from Groupon. The boys did not want to go back, in Lucas’ words, “I will never go back to that class. The teachers drew everything for us, and plus they don’t even speak English.” He was right about them not speaking English; I believe that they were speaking in Farsi. They disliked this class so much that they didn’t even like for me to drive past the art studio.

These kids live on their tablets, and that drives me crazy. I had a choice: let them become hypnotized on their devices, or think of activities that allow body movement.

We made up a list of things we could do. They protested almost everything on the agenda, with the exception of getting ice cream (of course!) Monday is going to be dedicated to going to the Orange Library and joining a book club. Lucas wanted nothing to do with that, but I forced him to check out two books. Jacob was excited to join the club, boasting to the librarian about how intelligent he is, and that his reading level is much higher than kids of his age. Then he added how good he was in math too. I couldn’t take another word, “Please, Jacob, tell the lady how humble you are too!”

When we got back from the library, for the first few hours all was quiet and the boys were enthralled in their books. I thought I had died and gone to heaven. These boys were really reading! We had come to a consensus that if they read for an hour then they could use their devices for a half an hour. I left the room and, sure enough, Lucas turned on his Chromebook. The battle was on, and Lucas insisted that the books that the librarian chose were above his reading level. He desperately tried to prove his argument by asking both Suri and Alexa, neither of which gave the answer that he was looking for. They never do.

Lucas wanted so badly to prove his theory so he asked for my phone and looked up Lexile. I had never heard of this system that measures the reading level of books. It took him a good half hour to prove that, indeed, this book was meant for 7th grade reading. He’s entering 4th grade, but I still have my  suspicions.

On Wednesdays we will be learning about saints or Bible stories. This week we studied the life of  St. Catherine Labouré, a French nun and visionary. The Blessed Mother appeared to her and instructed her to make a medal with this prayer written on it: O Mary, conceived without sin, pray for us who have recourse to thee. The Blessed Mother also said that those who wear the medal with trust will receive many graces.

I have been to the Chapel of the Miraculous Medal in Paris, France several times. I always go into the small shop adjacent to the church and purchase Miraculous Medals to share with others. In our home there are  three drawers dedicated to all the small religious purchases I’ve made when I travel. I found some durable yarn and threaded two Miraculous Medals for the boys to wear.

Soon we will be studying about St. Francis of Assisi. I looked on Amazon to purchase a book about this holy saint but refused to pay $7. Instead we drove over to The Bookman, a popular used book store in Orange. There I found a treasure of St. Francis books for $27. It’s a lost cause and inevitable: this summer is going be filled with me spending money.

My other two grandkids are so busy that their parents barely see them. Maddie has soccer camp all week, trying out for the high school team and practicing for her club team as well. She is also taking a summer health class, and will be trying out for the volleyball team in July. Wil is busy with basketball camps, two so far, and now he has taken up skateboarding. He is a gifted athlete and fascinating to watch. I imagine that my poor daughter-in-law Jenny is worn out with all the driving she has to do.

Next week the boys will go to visit family in Minnesota. You’d think I’d get a break, but no, their obnoxious dog Paco is staying with us. There is a slight possibility that this dog could be bipolar. He barks at airplanes, butterflies, and whatever his keen ears pick up on. You cannot walk Paco in public; I learned that the hard way. We were almost to the house when an old man with a black lab approached us. “Can they be friends?” He asked. I was about to open my mouth to yell, “No!” when that half-a-dog Paco  tore out of his leash and attacked a dog twice his size. In a panic I tried to get ahold of him and was knocked on my butt. I leashed him again, and again he went after the dog. The old man who  was walking the black lab was in shock. I was in complete humiliation, having to drag my battered body off the cement only to witness scene two. The dog fight was loud and seemed overly dramatic. Then I saw the old man give Paco a swift kick to stop the altercation. In disbelief  I watched with my mouth fully extended as I heard the old man saying, “Wow! Wow!” as he walked away.

Other than being the biggest jerk dog, he can also be the most loving.

There has to be a balance when being a grandparent. Above all I am going to teach them to love God.

6 “And these words which I command you today shall be in your heart. 7 You shall teach them diligently to your children, and shall talk of them when you sit in your house, when you walk by the way, when you lie down, and when you rise up. 8 You shall bind them as a sign on your hand, and they shall be as frontlets between your eyes. 9 You shall write them on the doorposts of your house and on your gates.