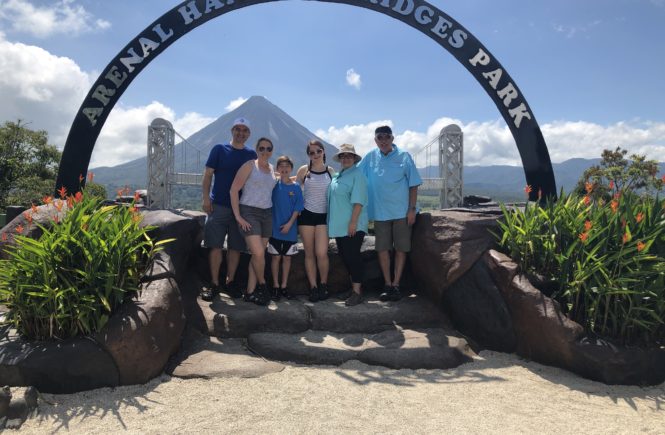 I’m never really included in the the planning stages of a family vacations. The only thing I need to know, are the dates, so that the trip doesn’t conflict with any of my personal obligations. Costa Rica, through my eyes, is a story of a beautiful country with bountiful resources that was a blessing to experience.

My traveling companions were Mike, (husband), Mikos (son), Jenny (daughter-in-law), Maddie, and Wil (our grandchildren). My son had worked on this trip for months, planning and paying for excursions months in advance, and making sure that we would have smooth sailing, I am grateful to my son for his loving hand, and special effort he put into making this trip come together.

When we arrived in San José we picked up the rental car and headed to a local Hilton for a one-night stay. The following morning we drove for several hours to El Tanque, a small village outside of La Fortuna, which is located on the foothills of the Arenal Volcano.

There are no addresses in most of Costa Rica, just street names. The Airbnb, in which we were staying read 300 meters from the soccer field; turn right on the street of Victoriano’s (a local restaurant). The place is a two story house lined with palm trees, and with these visual directions we made it to our destination.

We were greeted by Yadira, the caretaker of the home, and her sister Petrona. The home is a picture of a decorator’s dream. (It helps that the owner is an interior decorator.) It’s put together with natural Costa Rican stone, and the floors are all red brick, accented with wood. Everywhere you looked was a splash of comfort mixed with beauty, making you fall in love with this rustic home. I honestly could have stayed there the entire time.

By the time you reached the French doors of the house, your eyes would follow the patio overlooking a paradise garden, with walkway meandering to a gazebo, or to the edge of the jungle. The flowery scent of Costa Rica caused me to overdose on allergy meds, but I was fine with that. The birds serenaded us with early morning songs and the cicadas, in tenor, picked up the evening shift.

Yadira, and her sister Petrona, cooked for us. I quickly made friends with them, but it was not until the following day that I met Joaquin, the groundskeeper. They made our stay safe and pleasant.

On the day that my family went on a whitewater rafting adventures, I stayed behind. After breakfast I invited Yadira, Petrona, and Joaquin to a Bible study. Petrona looked downcast from the time we met, and I knew something was not right. She shared with me that she had to leave Nicaragua because of the political unrest. There was such sadness in her eyes when she spoke of her two children that she had to leave behind. I knew then that I had to teach on Matthew 6:25-34, about worrying. I explained to Petrona that God knows of her great sacrifice and that she would be blessed for her efforts. Petrona needs a job in order to bring her children to Costa Rica. I assured her that God will take good care of her children (who are in the care of her mother) while she is in Costa Rica. I also taught on the Passion of Christ, one of my favorite passages. I was most impressed when they shared with me that they abstain from eating meat for entire 40 days of Lent.

After Bible study I invited them for lunch at Victoriano’s. We walked to the local restaurant, and we all ordered hamburgers, and boy, were they tasty. My family must have been feeling guilty because I kept getting text messages from Mikos telling me how delayed they were going to be. I guess they thought I was going to sit around and twiddle my thumbs until they got back. After lunch we took a taxi into La Fortuna. This was my only disappointment, as this little village was saturated with souvenir shops, some pricier than others. One thing I did enjoy was visiting the Cathedral; as I walked in, a statue of Jesus resurrected is on the back wall of the main altar, it was magnificent.

This reminded me that on the way up to La Fortuna, we passed many homes that had large wooden crosses with purple sashes draped across them. The Ticos (Costa Ricans) are mostly Catholic, and it shows in the reverence they have for our Lord during Lent. Perhaps this may be one of the reasons that they are considered some of the happiest people on earth. The Ticos, who lead simple, faithful lives, are a sustainable culture, growing most of what they eat. They are big exporters as well, with bananas being their biggest commodity.

As a family we visited the Arenal Hanging Bridges. For the first time I saw monkeys swinging freely from one treetop to another. We also saw a sloth perched high up in the tree. We saw many types of other animals living the Happy Tico life.

La Fortuna Waterfalls is 500 steps down, which means it 500 steps up. It was through the grace of God that I made it. On the way back up Mike was behind me, making sure I did not slip. I took a lot of breaks, but never suffered muscle aches the following day. I attribute this to my sporadic workout regime, and singing (to myself), “One step a time sweet Jesus.” I could not believe that my family got into the water at the bottom of the falls, I have seen one too many episodes of “The Monster Inside Me” to ever do that! I prayed against any parasites.

Mikos was most impressed with the leaftcutter ants and their industrious way of life; he felt convicted, and said that he needed to work harder, (definitely wired a capitalist).

Before we left for Jacó, both Yadira and Petrona gave me their prayer requests, which I promised to take with me to the Holy Land.

We drove for hours and finally reached Jacó, a beach community. Again no addresses, but thank God for the Waze APP, as we arrived unscathed. Mikos and Jenny only stayed with us for one night, and then they were off to Antigua.

Yadira’s cooking was wonderful; she made everything from scratch. Each meal included fried plantains, black beans and rice, and of course, an array of fresh local fruits. I loved all the fresh fruits, with the exception of the papaya, which left a throw-up taste in my mouth.

I thank God for allowing us to bond closer as a family, I understand my daughter-in-law Jenny better and how she sacrifices for her family. Every breakfast at Rancho Arenal, we would order our meals, but Jenny was so busy getting things together for everyone else that every time she sat to eat, it looked like leftovers. Mikos would say, “Aww baby, do you want half of my bacon?” Jenny never complained; she just ate, and it was mostly fruit for breakfast. She taught me a lesson on servanthood. She was like Jesus, and we all know that He was the greatest of all servants.

Both Maddie and Wil traveled back with us to the States; aside from breaking up a few catfights, all went well. We all arrived in one piece, safe and sound, praise be to God. PURA VIDA!

7 “But now ask the beasts, and they will teach you; And the birds of the air, and they will tell you; 8 Or speak to the earth, and it will teach you;
And the fish of the sea will explain to you.9 Who among all these does not know That the hand of the Lord has done this,10 In whose hand is the life of every living thing, And the breath of all mankind? 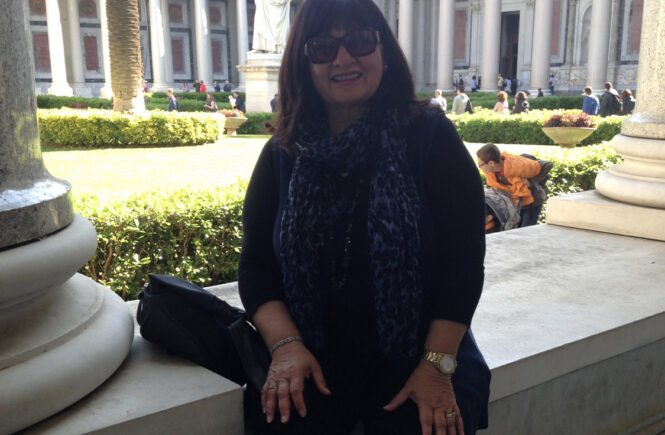