A Thanksgiving Story by a Native Californian 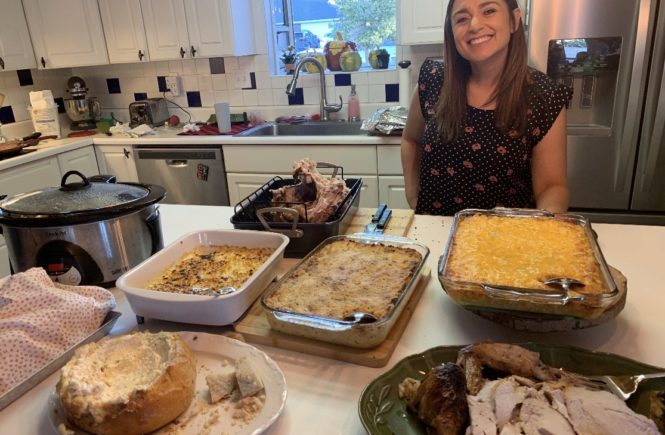 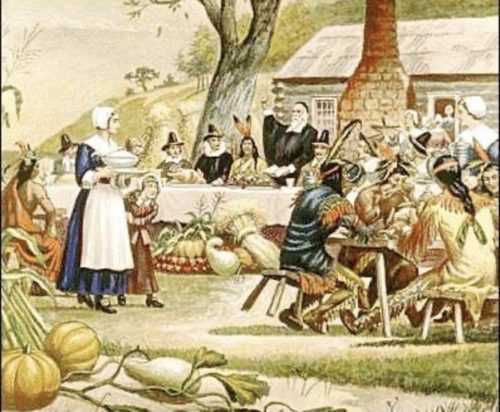 I am part American Indian. Actually a large part of my heritage is Indigenous Americas-Mexico. My father was born in Phoenix, Arizona, so some where in the back roads of history my ancestors were part of Thanksgiving. I am also part Spanish, which links me to the Conquistadores who first came to Florida.

When I was in elementary school I learned about the indigenous people and the Pilgrims getting together to celebrate the first Thanksgiving. The historic images were always the same an Indian chief presenting a feast to the Pilgrims, and the Puritan women serving the meal. They all sat down and enjoyed a wonderful bounty. But is this what really  happened? Or is this where fake news originated? Yes, back in 1621 the Puritans, who were English Protestants/Separatists, wanted to break away from the stronghold of  King James I and the practices of the Roman Catholic Church, so they came to a New World seeking religious freedom. They came across on the Mayflower and landed on the cold shores of Plymouth, Massachusetts. Little did they know that the Wampanoag Natives had inhabited the land thousands of years before their arrival. Fifty -six years before the Pilgrims’ arrival, the Spaniards  landed in Florida. It was the feast day of St. Augustine; they named the colony after the saint and built an altar to give thanks to God for their safe journey. The Timucuan Indians watched as the Spaniards celebrated Mass. The Native Americans were invited to feast with the new settlers. The Timucuan tribe may have brought wild game, squash and seafood, while the Spaniards may have cooked up some cocido, a Spanish soup made with pork and vegetables. This should have been considered the first Thanksgiving celebration. St. Augustine was also where the first Mass was held in the U.S. The first mission to American Indians originated in St. Augustine. And since I’m more than 1/4 Spanish, my ancestors were part of the first Thanksgiving.

Can you imagine the stress level of this wonderful President? Abraham Lincoln was doing everything in his power to heal a broken nation. The Civil War was raging, and all the fighting was taking its toll. In the meantime Sarah Josepha Hale was on a letter-writing campaign; she was petitioning for Thanksgiving to be made a national holiday. Through her urging, in 1863 President Abraham Lincoln declared the last Thursday in November as Thanksgiving Day, making it a national holiday. President Lincoln was distraught about the division in our nation and wanted to bring back unity in the country. It was not until 1941 that President Franklin Delano Roosevelt moved the date to the fourth Thursday in November. This was done to boost the economy and to kick off Christmas shopping.  I thank God for Abraham Lincoln and for all of our presidents of this great country because I believe that their positions are God-ordained.

4 Sovereignty over the earth is in the hand of God, who appoints the right person for the right time.

Abraham Lincoln was the also the first president to pardon a turkey. His son Tad adopted a turkey as a pet, but when it was time to eat the big bird, the boy begged his father not to kill it. The turkey was spared and the rest is history.

For as long as I can recall my wonderful husband has prepared our Thanksgiving meals. This year our daughter Sonja and her husband Russ hosted a “Friendsgiving.” Sonja asked Mike if she could help prepare the meal. She said that she wants to learn the recipes so that soon she can take over making the meal. If you were to ask our son Mikos, he would say that his sister just wanted Dad to cook for her friends. either way Sunday was our first Friendsgiving.

Mike was putting the finishing touches on the Friendsgiving meal, Sonja and I were folding her laundry when she received a disturbing phone call. The call was from her old district manager, informing her that another colleague had passed away. This man was a dear friend and mentor to Sonja. She was in shock. The holidays may bring joy to many, but to others it’s a time of sadness. Satan hates joyful family gatherings and uses these opportunities to take advantage of those most vulnerable. Not an hour had passed before another friend called Sonja to inform her that his sister-in-law tried to commit suicide. Thank God she was not alone.

21 Do not give in to sadness, or torment yourself deliberately.  Gladness of heart is the very life of a person, and cheerfulness prolongs his days.

With the help of her husband, Sonja was able to put on a brave face for her guests, but we knew how much she was hurting for her friends.

Thanksgiving is a time to not only be thankful for our  loved ones, but to reach out to our friends who have no family around, and to make sure that they have a special place to sit at our tables. God knows, your kind act could be saving a life.

Dear Lord, I ask that You bless all families getting together for Thanksgiving.  Let us keep all our differences to ourselves. May we be gracious to our guests, and show the love of Christ in our homes. Let us truly give thanks for this wonderful country we live in. Both the Pilgrims and the Spaniards had You in mind when they landed in the New World. Allow us to heal our differences and to accept Your will to be done in our country. May our speech be seasoned with love, and may You pour out special blessings on our nation. We lift up all who are hurting from the loss of loved ones. And for those who are lonely, bless them and let them know You have a clear purpose for their lives. Amen

Happy Thanksgiving, and we give thanks to God for all of our blessings!