Big Boys Cry Out to God 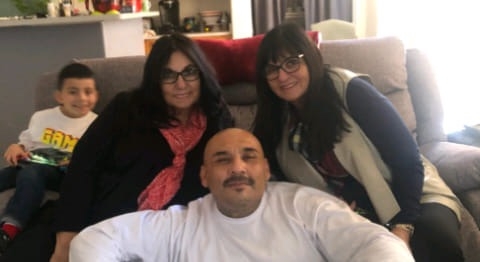 Years ago I had a prophetic dream so vivid that I never forgot its details. The dream was about my nephew Freddie. At the time he was trying to find his place in the world. At a young age Freddie made poor choices in life that led to self-deception. Sometime boys outgrow these behaviors, but Freddie continued to force his way into the world by believing a lie.

Mike and I were in our green Suburban. We knew Freddie was in trouble and we were on our way to pick him up. We found him, but we could not get him to fit into the back seat of the Suburban. We opened the door to the back of the vehicle, but again, he did not fit. I could see the red hospital sign from a distance. “We just need to get you to the hospital!” I said, pointing to the sign. I was not going to give up that easy, so I flagged down a taxi. Freddie tried to get into the back seat of the cab, but to no avail; he was too big. We tried several different ways, but it was impossible. Again I looked up and saw the red hospital sign but there was nothing we could do to help.

My sister Norma is like St. Monica. Norma never gave up on praying for Freddie. Like St. Monica she believed God for the impossible for her son. For years he had lived a life of debauchery. Not only was he steeped in sin, he welcomed and enjoyed it. He knew exactly when he was sinning, but he did not stop because he crossed over to the dark side. His mother St. Monica, never stopped praying for her playboy son. For thirty years she prayed.

From St. Augustine’s Confessions: “How presumptuous it was of me to say that You were silent, my God, when I drifted farther and farther away from You! Can it be true that You said nothing to me at the time? Surely the words which rang in my ears, spoken by your faithful servant, my mother, could have come from none but You? Yet none of them sank into my heart to make me do as You said. I well remember what her wishes were and how she most earnestly warned me not to commit fornication and above all not to seduce any man’s wife. Yet the words were Yours, though I did not know it. I thought that You were silent and that she was speaking, but all the while You were speaking to me through her.”

Until we study the lives of the saints, we cannot be made aware of all their sufferings. St. Monica not only had a wayward son, her husband was abusive; and she had to deal with her mean spirited mother-in-law as well. Even with all these obstacles, she continued to remain steadfast. A year before her husband died, he became a Christian; then her mother-in-law followed in her son’s footsteps. But it was St. Augustine who occupied her time with God. The Lord must have revealed to her part of the big plan He had for her son St. Augustine. Many of the saints were content in their sufferings. I know of no saints who did not have to travail for what was in store for them or for those whom they were called to pray for. The Lord used them. He trusted them because they were being trained in the Army of God. The battle of today’s army is being fought with the mighty saints in heaven by our sides. Each of these saints had already paid a hefty price on earth. After St. Augustine was received into the Catholic Church, he went on to become the Bishop of Hippo. His calling was great, and he left us with rich writings to teach us a thing or two about the sins that he was so accustomed to committing. His mother, St. Monica, died nine days after he became a Christian. These were her words to her son St. Augustine, “Son, nothing in this world now afford me delight. I do not know what there is now left for me to do or why I am still here, all my hopes in this world being now fulfilled.”

Have you heard of this powerful ministry? They are not for the faint of heart, but they got ahold of Freddie’s heart. In the dream mentioned earlier, Freddie was not ready to give his life to God. He was St. Augustine, sinning and running with the wrong crowd. God cannot do anything with us until we have the will to change. Freddie needed a ministry that understood his life; he needed to surround himself with people who lived in the same type of sin. Victory Outreach is  for everyone, but especially for Freddie. They understand how a hardened heart can be changed. They open men’s homes all over the world to win souls over to Christ. Before his conversion Freddie was a scary dude; his tattooed  body did not help his image either. Nine years ago our late mother told Norma, “God is not done with him yet.” Freddie has only been with Victory outreach for six months, so to some this great news may come across as premature; but to us, it’s long overdue.

Recently I spent one night at my sister’s home while Freddie was staying with her, he was recuperating from major surgery. I decided to have a Bible study. For several months I have been studying Wisdom, a book in the Catholic Bible. Protestants do not have these seven Deuterocanonical  books because Martin Luther, the renegade Catholic priest who started the Protestant Reformation removed them from the Bible. I knew that Freddie has  really been studying the Word of God for the last six months; but I also realized the the book of Wisdom was not one of them. For three hours Freddie listened to the Word; he was respectful, and did not dispute the books not included in his Bible. To me this is a sign of someone who wants to know the One True God. Though he is on a Daniel fast, Freddie devoured the Word of God as if he were having the meatiest steak.  When we went to lunch, Freddie asked if we were going to pray over our meal. Imagine that! Please join our family as we pray that Freddie continues on the right path and that he, like St. Augustine, will make a difference in others’ lives.

25 Turn back to the Lord and give up your sins,
pray before him and make your offenses few.
26 Turn again to the Most High and away from iniquity,
and hate intensely what he loathes.