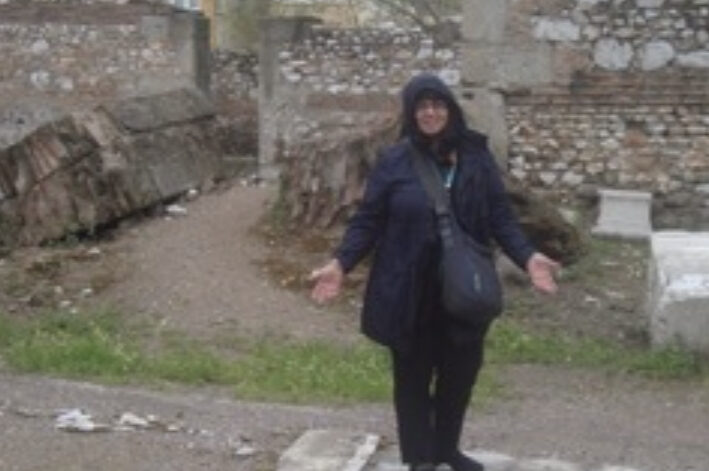 When the Apostle John addressed the Seven Churches in Asia Minor, he did so for the sake of correction. These churches had varying degrees of straying from God. Laodicea was one of the worst examples.

Laodicea was a thriving commercial city; it was known for its medical institutions, its advanced banking system, its exports of black wool textiles, and eye ointments. Laodicea suffered from spiritual poverty. When the Lord spoke to the Laodiceans, He accused them of being lukewarm. The unusual  history of Laodicea is that it did not have cold water like its neighbor Colossae, nor did it have hot water like Hieropolis (Pamukkale), which has hot mineral springs. By the time the water ran from Hieropolis to Laodicea, it became warm and mixed with other things, causing vomiting if one drank it. The Laodiceans could not swim in the waters because they caused infections that resulted in blindness, or ear infections that caused the loss of  hearing.

14 “To the angel of the church in Laodicea, write this:

‘The Amen, the faithful and true witness, the source of God’s creation, says this: 15 “I know your works; I know that you are neither cold nor hot. I wish you were either cold or hot. 16 So, because you are lukewarm, neither hot nor cold, I will spit you out of my mouth. 17 For you say, ‘I am rich and affluent and have no need of anything,’ and yet do not realize that you are wretched, pitiable, poor, blind, and naked. 18 I advise you to buy from me gold refined by fire so that you may be rich, and white garments to put on so that your shameful nakedness may not be exposed, and buy ointment to smear on your eyes so that you may see. 19 Those whom I love, I reprove and chastise. Be earnest, therefore, and repent.

20 “Behold, I stand at the door and knock. If anyone hears my voice and opens the door, [then] I will enter his house and dine with him, and he with me.”

The words that Jesus spoke to the Laodiceans were harsh, but when someone is in deep sin, the only way to reach them is by telling them the truth. God is not interested in your wealth or your personal status in life. He doesn’t care if you’re highly educated with several Ph.D’s. He only cares that you follow His truth. The Laodiceans were so caught up in all their material wealth that they lost sight of their first love, Jesus Christ. What the Lord has to offer cannot be compared to money, the finest of black wool, or eye ointments. What He has for us is supernatural sight.

It’s a slow process to become spiritually lukewarm. It starts with believing in half-truths, and it ends with complacency. You make allowance for sin because you’ve become comfortable with the norm. It’s easy to give in and not get caught up in a dispute. When you’ve reached this level of misconstrued understanding, you’re sold out, or in this case you’re woke. A half-truth is a complex way in which the Devil can manipulate you into believing the lie. The Lord only operates in truth; you either follow Him wholeheartedly or you are categorized as lukewarm. We can’t sit on the fence when it comes to serving God. You don’t get to pick and choose what you want out of the Gospel: sin is sin. One thing is certain: once you’ve crossed over to a lukewarm spiritual mindset, it will take a supernatural act of God to bring you back to the truth.

The truth has nothing to do with politics, vaccines or climate change. The truth is God is still seated on the throne, watching our every move. It pains Him to see the hate, the division, and how the world is lukewarm. Apathy has hardened the hearts of many because they close their eyes to the truth. Even though the Laodiceans invented eye ointments, they still could not see because of their spiritual blindness. Jesus waited for them, standing at the door and knocking. Jesus never forces His way into our lives. His gentle spirit makes a way for us through His messages. We must have an ear to hear what the Spirit is saying.

I twice visited the Seven Churches of Asia Minor. They are all located in Turkey. The ruins are neglected with overgrown foliage because this country is 99% Muslim, and these ancient treasures are not important to them. Aside from Ephesus and ruins of Hierapolis (Pamaukkale), and Pergamum we were the only tourists visiting the other four churches mentioned in the Book of Revelation.

The Germans saturated the hot springs and medicinal pools for enjoyment. I rolled up my jeans, walked through the hot streams and felt the hot water run through my feet.

These Seven Churches of Asia Minor in the Book of Revelation are a modern day messages to set us straight with God. Just as He did with the Laodiceans, our Lord stands at the door and knocks.

The last memory I have of our country being united was after 9/11. I remember attending Mass with my friend Helen and her son Jason. I wore a red shirt with God Bless America imprinted across the front. It was remarkable to see so many people at Mass that afternoon, our hearts were crushed. This genuine feeling of patriotism was shared by most Americans, as we grieved the loss of so many innocent lives that day. In total 2,977 were killed including 19 of the hijackers.  343 members of the New York Fire Department and 71 law enforcement officers sacrificed their lives on that dreaded day.

Dear Lord, I pray that You continue to touch the hearts of those affected by the 9/11 attack. Twenty years have passed, but for them it was as if  it was yesterday. Lord, I beg You to restore unity in our great nation. Teach us to love and respect Your laws. Amen.