In-N-Out, That Is Not All What A Hamburger Is About

I promised the kids that we would go to In-N-Out Hamburgers to eat if they helped with cleaning my house. Maddie was especially helpful because she wanted her friend Brittney to join us.

Will and I sat at a separate table and started talking about In-N-Out, and how they place Bible Scripture on their packaging. This built up a big curiosity that I was going to get answers to. I called the In-N-Out corporate Offices and spoke to Christy, Customer Service Supervisor.  Christy shared that Rich Synder, the former president of  In-N-Out, wanted to express his faith without imposing it on others. Christy emailed me the information on the twelve verses in all the  In-N-Out packaging. In-N-Out has been placing Bible verses for more than 20 years.

The Scripture on Will’s  chocolate shake  is from Proverbs 3:5, which reads, “Trust in the Lord with all your heart; and lean not on your own understanding; in all your ways submit to him, and he will make your path straight.”  This powerful Scripture is witnessing to many as it is one of those Scriptures that does not need interpretation, providing simple guidelines for living a good life. Will also had fries, and on the fry boat was Proverbs 24:16, a Scripture which was recently introduced 2016, as follows “For though the righteous fall seven times, they rise again, but the wicked stumble when calamity strikes.” This message is profound and comes with a warning. The righteous will fall but with God’s help they will prevail, not the wicked, they will pay and repay for their misgivings. On Will’s hamburger bag was Rev 3;20, which reads,  “Here I am! I stand at the door and knock; if anyone hears my voice and opens the door, I will come in and eat with that person, and they with me.” I determined that there was a special blessing on the food at In-N-Out, this verse being about Jesus standing at the door of our hearts, and lovingly waiting for us to respond. This same verse can also be found on the beach t-shirt located on the license plate of the Mustang. On the motorcycle t-shirt is Luke 10:27  (located on the trunk of the palm tree), And he answered , “You shall love the Lord your God with all your heart, and with all your soul, and with all your strength, and with all your mind; and your neighbor as yourself.” This is what Jesus calls the two greatest commandments of the Old Testament, and is also part of Parable of the Good Samaritan.

The greatest discovery for me was that In-N-Out has Isaiah 53 on R-9 cups (used for water). Isaiah 53 is about the Passion of Christ.

Isaiah 53 is a part of the Dead Sea Scrolls  which were discovered by a Beoduin shepherd boy in 1947 in Qumran, Israel. Of all these treasured Scriptures found in Qumran,  Isaiah  is most intact, and is 1,000 years older than any previously known copy of Isaiah. In fact, it is the oldest group of Old Testament manuscripts ever found!  To Christians there is nothing more indisputable than this part of the Old Testament because it solidifies the prophecy of the coming Messiah, Jesus Christ.

In 1993, a terrible plane crash claimed the lives of  In-N-Out President Rich Snyder and Vice-President Philip West. The private jet that they were in returning from a stop made in Fresno for the opening of a new restaurant. The plane was going to Bakersfield where the team of executives were scouting for new locations. The jet stopped in La Verne, CA, where Esther Snyder disembarked at Brackett Field. Esther Snyder and her Husband Harry were the founders of In-N-Out. The Matriarch was spared her life that day so that she could get her business in order. Esther Snyder must have done a lot of praying in preparing the only heir to the throne, Lynsi Snyder, to take over the reins.

In-N-Out is a privately held company with Lynsi Snyder the sole owner. She is the only grandchild of this empire and continues to operate the way that is was originally established. Why would you change perfection? With the patriarch and matriarch gone, The Lord has placed a hedge of protection around Lynsi Snyder and In-N-Out. Their success will continue because this organization put God first.

My grandchildren are finally back home, but not before we experienced a break in before they left. It was about 3:00 A.M. when I heard the noise. Mike was out of town and Will was spending the night with his cousins, so it was just Maddie and I. Maddie and I were sharing the same bed, we said our prayers and Maddie fell immediately into R.E.M. I was still praying the Rosary when I heard the first sound. We have two cats and I am familiar with their annoying sounds. This was not a cat. My prayers were accelerating as I tightened my grip on the Rosary. Then a loud bang. My heart was beating out of my chest and I could hear muffled sleep talk coming from Maddie. I grabbed the St. Benedict cross with my other hand and realized that I had to face an intruder. I was in the middle of a Hail Mary when the door flung open and intruder, my grandchildren ‘s  stupid dog Rosie jumped into bed with us! So frightened that I could not scream, I rounded Rosie up and secured the gate in the family room, and was finally falling asleep when the cat started meowing. It was Maxine, the 19 year old cat. This cat’s sound has changed to an eerie sound of a newborn baby in distress. I got up and locked her in the kitchen. With all the excitement I finally fell asleep at 5 A.M.

I suffered waffle foot burns from the soccer tournament and my nose was so red that it looked displaced on my face.

We finally have our home back but I miss my grandchildren, I never thought I say that!

If you are reading my Blog, please give me a thumbs up on comment section, or write a comment. Thanks 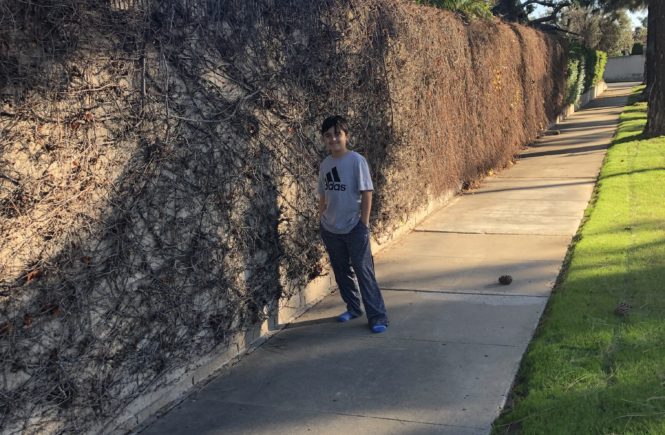 The Border Walls Around Our Minds