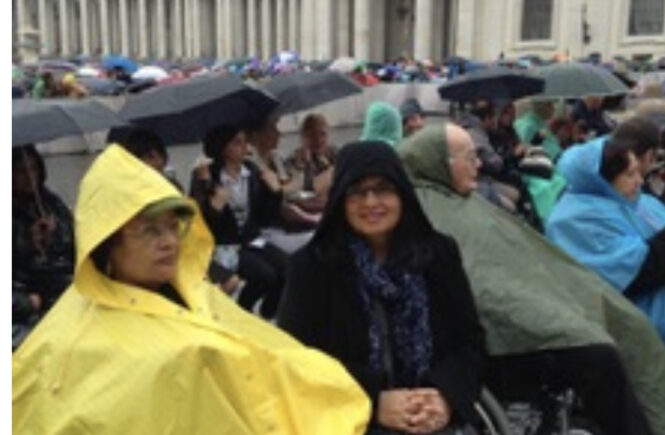 With so much bombardment  of the media, it was impossible to not miss the most shocking of all news feeds. Pope Francis has announced that he supports same-sex civil unions. I, for one, was not surprised by this grievous report.

In April of 2014, our missionary group traveled from Israel to Rome. We were there to witness the canonization of Pope John Paul II. A few days before the blessed event, we had an audience with the Pope. We had tickets, got up extra early, and took a taxi to the Vatican. I had to beg my friend Cathryn to allow me to push her in a wheelchair; thankfully, she agreed. It was a cold morning, but that did not matter because of the excitement of seeing the Pope. We were sitting in the front row; you can’t get any closer than that, right? We were eating the breakfasts that the hotel had prepared for us; then the weather turned. We had umbrellas, but the rain was constant, softly falling over everyone. We were getting soaked. Suddenly these men in long black coats motioned for us; to get up. One girl from the U.S. started to complain, “Why are you doing this? We came from so far away, and now you’re asking us to move?” I had an idea as to what was about to happen. I wanted to tell the foolish girl to be quiet, but I had to push Cathryn. What these men were doing was getting us out of the rain. I was running ahead of others to get a good seat to the private auditorium. The bumps on the cobble stone were causing Cathryn to bounce up and down like a rag doll. That did not matter because I was running to secure a good spot. All I could think of was my plan to get through the massive wooden doors before others. In all the commotion, two rows were formed, with a wide aisle between them. That’s when it hit me: the Pope was going to come in person to greet our small group first! There was a huge, televised live screening that allowed us to see the thousands of people waiting outside St. Peter’s Square. The young American girl started with her lamenting again, “We want to be outside! We want to see the Pope in person, not on a live screen!” This time I gave her a disapproving look, and was about to tell her to shut up when were were all handed a small piece of paper. 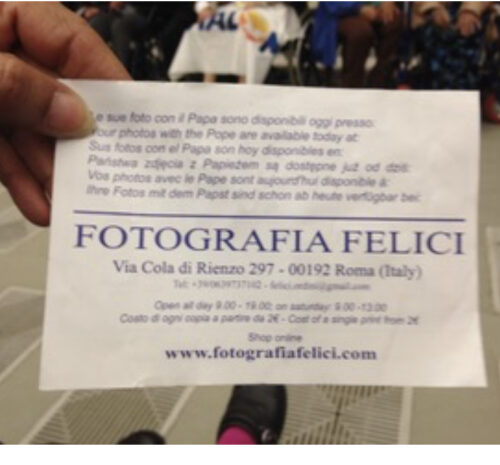 The paper was written in Italian, but I knew what it said. We were about to experience a holy encounter with the Pope.

The Company You Keep

We were traveling with our lay group that included two Filipinas, one of whom was Carmelita. Carmelita and I had roomed together on several other missionary trips. She was responsible for getting me into the habit of praying more fervently. Late at night if I made the slightest move, Carmelita would say, “Lynda, are you awake?” I was always tired but would reluctantly answer yes. With Carmelita it was never a simple five minute prayer but the entire Rosary with special intentions in between the decades! She is one of the most faithful, holy women that I recognize  as a truly devout Catholic.

Sure enough, just as I suspected, The huge doors swung open and there he was, in the flesh, Pope Francis. Whatever was about to happen was going to be quick and sweet. Carmelita and her friend were sitting next to Cathryn and me. She started to cry, “Oh my God, the Holy Father! The Holy Father!” These were real tears and, as I was witnessing this, a quick thought came to me. “Should I cry too?” With all the emotion and trying decide whether to cry or not, when the Holy Father came to me, I took his hand and kissed his ring. You will never guess what he did to me; he gave me a swift pat on the head and moved to the next person.  I received this as a “Snap out of it moment!”  I had given Carmelita and her friend my phone in order for them to take pictures, but with all their emotions flying all over the place, neither of them could get a good shot. I tried to remember Pope Francis’ outstanding features, all the freckles on his face, the color of his pearly gray teeth and how he smiled and shuffled his feet. I was mesmerized by his presence. This feeling stayed with me the entire day.

April 27, 2014, was the day  of the canonization of  His Holiness John Paul II. We had a wake-up call at 3:00 a.m. No vehicles of any sort were allowed near the Vatican, so we had to take the metro. Our tour guide warned us to stay together because of the crowds. I had purchased a small folding stool in California; this would prove to be both a blessing and a curse. All the entrances to St. Peter’s were secured with barriers. We were a group of about eight. As soon as we exited the metro, our group was violently separated. In a rush, a police officer opened a small portion of the barrier and hundreds tried to make their way in, trampling others in their path. We lost half of our group with that episode. We reached an area on the side of St. Peter’s and we stayed there for hours. A Polish group kept singing the same annoying song; it was undoubtedly  a praise song but it was way too early to receive this blessing. Then a Polish man pulled out an accordion and started playing music. My heavy, sleep-deprived eyes were rudely forced opened by this irritating music. We were all taking turns sitting on the stool. Nothing was more uncomfortable than this stool but we needed to rest our feet. I wanted to cry from the pain of sitting on this three-legged stool, but the pain of standing outweighed it. Finally after six hours the barriers were opened, and once again the crowds rushed to get in. I closed my eyes and tried to recall our front row seats from the days before this mayhem. Now we were so far back, sitting on the cold cobble stones, reduced to peasants. Not even the stool from hell brought us any reprieve.

As we settled on the cold ground, the most beautiful music filled the crisp air. I cannot compare anything to this welcoming sound; it quieted the crowds into submission and ushered in the anointing. On this special day Pope Benedict XVI  and Pope Francis shared the same stage. I love Pope Benedict, so this was magical for me to witness. Now I understand why Pope Benedict stepped down. He foresaw the evil the Church was going to go through.

Pope Francis’ ambiguous remarks are weighing heavy in my heart. Many Spirit-filled Catholics have been carefully listening to what he is attempting to introduce. I, for one, struggle with who he really represents. In my observation our Pope comes across as worldly with undertones of Socialism. His opinion on gay unions was so misinterpreted that by the time it hit the news, gay Catholic couples were being interviewed, rejoicing in celebration. The Pope never said that the Catholic Church’s position on marriage between a man and a woman was going to be altered. The Church would never allow this. Our Pope never clarified this statement, so who could blame the news media with this confusing, speculative misinformation.

The presence of evil will always be allowed by God. We need to remain steadfast in our Catholic beliefs and fight the good fight. Satan and his minions are working double-time to destroy anything that is holy. This type of evil is much stronger than ever before. It is almost tangible and, for certain, you can see it with your own eyes.

Dear Lord, I pray for Pope Francis, that You would touch his heart and convict him when he is out of Your holy order. Lord, we beseech You to help us through these trying times. Strengthen us spiritually to fight this battle and to have victory for Your Kingdom. Lord, I pray for the national elections in our broken country. Lord, bring forth the man who will protect the rights of all humans,  the sanctity of marriage and the right to life. Please hear our prayers.  Amen. 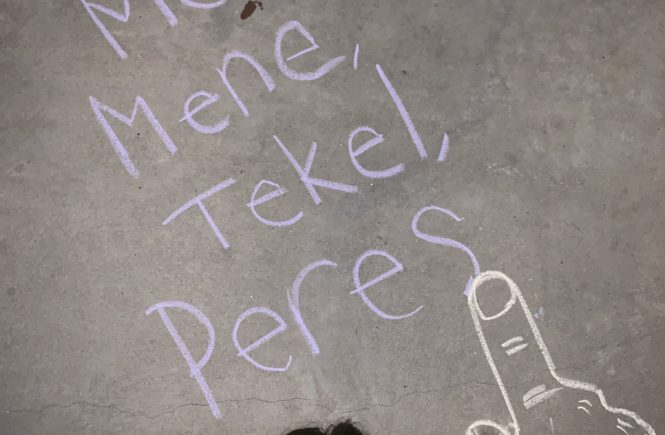 How to Become a Better Christian 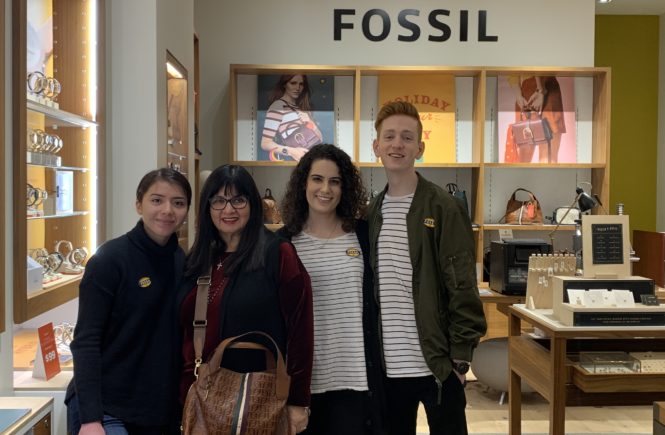 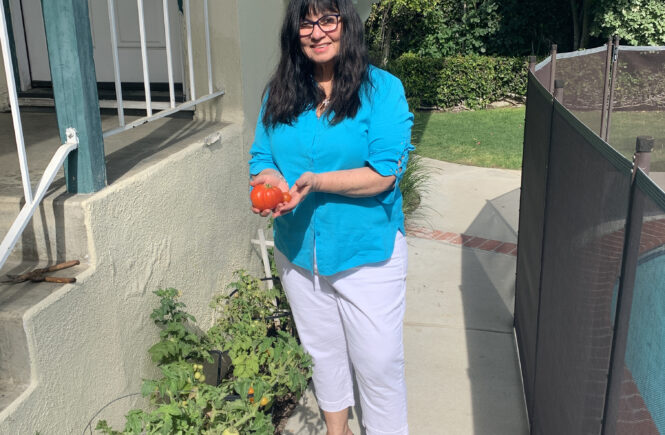