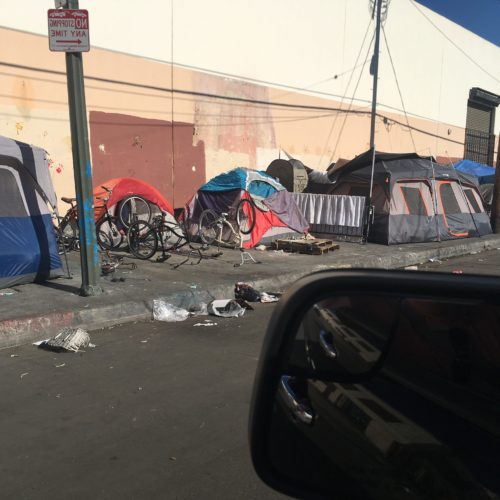 In  the 15 years that we have been serving the homeless I have never witness such atrocious conditions. The streets that we usually make our way through were impassable due to all the tents taking up most of the sidewalks. With the increase of population comes the anger and with the anger comes the contention. One lady was so upset when a drugged out man ran off with her obese Chihuahua. The woman almost took a swing at the person  that informed her of the dognapping. The dog owner’s volcanic mouth spewed out about five “F” bombs all in one sentence, her green hazel eyes were  glazed over in angers as she carried away the dog like a newborn.  We are well trained soldiers and never get in the way of this type of dispute unless it is a matter of life and death, and even with that we are forever watching each others backs.

I met a Caribbean man that gave way too much information about a snake bite, opening his shirt exposing his torso of all the skin grafting, it really resemble a patchwork quilt. It was when he told me that a large part of his buttocks was also grafted that I politely held up my hand and told him “Ok, Ok, I understand.” The poor man is still suffering an open wound ripe for an infection and especially in these conditions. I asked him why he was homeless and, he said that he had no papers; his chubby friend said that he was visiting him, with that they both laughed at the whopper.

It was just Robert, John and myself, and with so few of us it’s a challenge to pray for homeless because we have to keep an eye on two carts and sandwiches or else they get stolen. It’s a miracle that our vehicles have never been vandalized, I know that God assigns special angels to guard them.

There was a parking spot in front of our homeless friend Carlos’ area, I have know him for years and as a matter of fact he served as our photographer. At first Carlos was reluctant to have anything to do with using my phone but after a short lesson he did a great job, Carlos is peaceful soul that has earned the respect of other homeless.

At every street block is an area that is run  with what I call the “master,” that person controls who get to hang out there and if you are not welcomed by the “master” you best find another street block. The homeless have a pecking order and the one with most anger is the leader.  The women are victims of their drug abuse, where they can obtain the drug on a regular basis that is where they make their dwelling.

The homeless are lonely so this is where the Chihuahuas come in, they are a low maintenance dog, eating small amounts of scraps, their dung is also small in comparison to those of a Pit Bull. If you research online animal shelters, you will discover that the Chihuahua ranks second and third, no one wants them,  oh the irony! The homeless are doing a service by keeping the yappy dog out of the shelters.

Darell and his friend Tanisha did not really want prayer but I prayed for them anyway. As I was praying the Lord was revealing things about Darell, and though he was most skeptical to receive prayer, he quickly reacted when I mentioned that he would be using his voice for singing again. He chuckled, and asked me how “How did you know that I could sing?” “The Holy Spirit revealed it to me” I told him. He and Tanisha will not make these streets their home, through the grace of God they well find their way out.

I prayed for Joseph, a precious wheelchair bound man, he was completely receptive of what God had for him. Joseph’s sweet dispositions and many others like him always eases our ministry to operate in the love of God.  For the  over 2,500 homeless in this 40 block area that are referred to the chronically homeless we pray that God will protect them during this transition.  They make up a small population of the staggering statistics of over 82,000 homeless in the greater Los Angeles area.

If you offer your food to the hungry and satisfy the needs of the afflicted, then your light shall rise in the darkness and your gloom be like the noonday. The Lord will guide you continually, and satisfy your needs in parched places, and make your bones strong; and you shall be like a watered garden, like a spring of water, whose water never fail. (Isaiah 58:10-11)