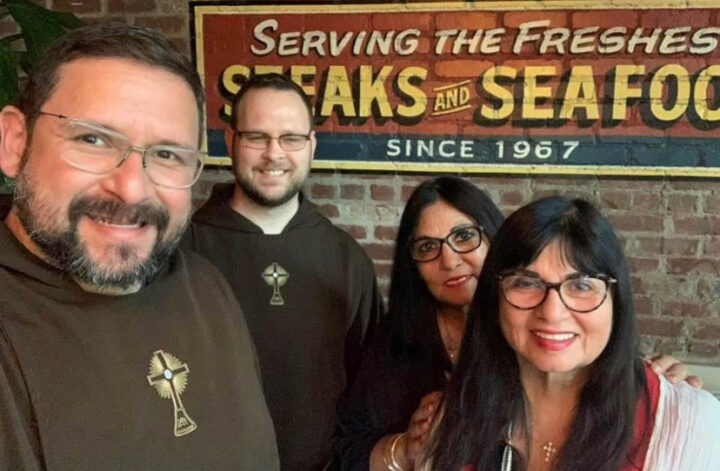 My plans for a trip to EWTN in Irondale, Alabama were set. My sister Norma and I would make a pilgrimage and spend time visiting the Shrine of the Blessed Sacrament to pray. On the morning of our departure both of our flights were canceled. I spent several hours sorting this out but now Norma would be flying solo and meeting me in Birmingham. Through the grace of God we made it only to find more obstacles waiting for us at the car rental. We had reserved a mid-sized vehicle, but due to COVID we ended up in the biggest Infinity SUV. It took two hours to sort all this out. Finally we arrived at our “Bates” hotel only to discover that someone was already in our room “very creepy”. By the time we settled into another  room it was 3:30 am. 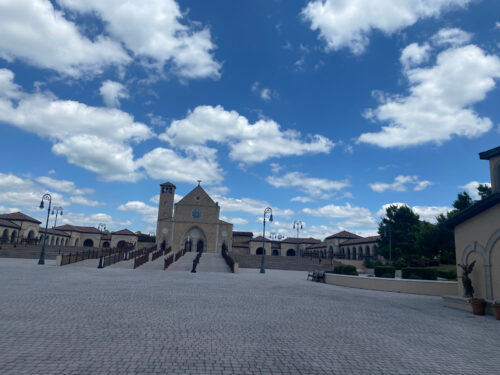 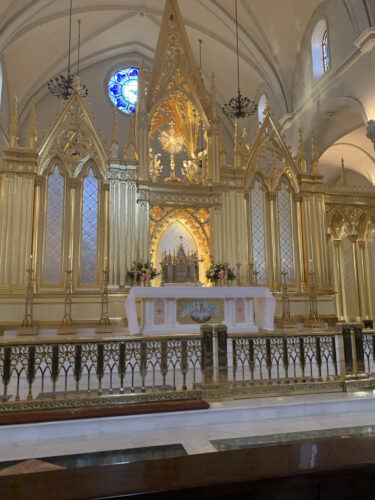 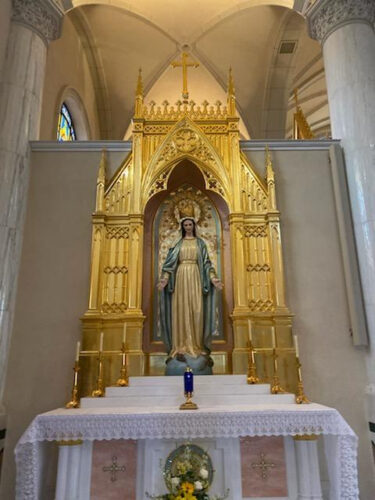 The Shrine of the Blessed Sacrament

This 600-acre complex is in the small community of Hanceville, Alabama. Both my sister and I were out of the spirit and suffering fatigue. We were driving this huge SUV and complaining most of the way. When we arrived I noticed my phone had no charge; we forgot to bring a charger. We had about 20 minutes to shop in the gift store. All was going according to plan when suddenly a lady stepped up to the register. She was making five different transactions, paying separately while teaching her daughter to make change! I looked at Norma and rolled my eyes as far back as I could, saying to myself, “Lady, we are going to be late for the service because you want to teach your daughter math!” We had to leave all of our purchases on the counter and run to make the Mass. We knew that Father Leonard Mary was officiating. It was during his homily that I realized that this message was meant for Norma. Father Leonard spoke of the Beatitudes, so I gently nudged Norma when I felt it was approtriate.  I never expected her response; she nudged me back!

After Mass we made our purchases and went back into the shrine for Adoration. The presence of God was so powerful it almost felt tangible. Though it’s was frowned upon to take pictures, we sneakily took a few photographs. At the back door was a slim man praying the Rosary. He was also the watchman, making sure no overzealous tourist got out of hand. I told Norma to take a picture of the Blessed Mother, but Norma got out of the pew and walked up to the statue. Her bold behavior brought the watchman out of his seat. Norma looked at him and said, “Am I in trouble?” The man gently said no but asked us not to take any more pictures. We waited for Confessions and by the time we had finished it was close to 5 pm. I never understand GPS maps, so this time the hour- and a-half drive took us through green rolling hills. We passed through miles of mansions, big beautiful homes with sprawling yards. I have been to Birmingham several times, but I never expected these views. These homes were stunning! 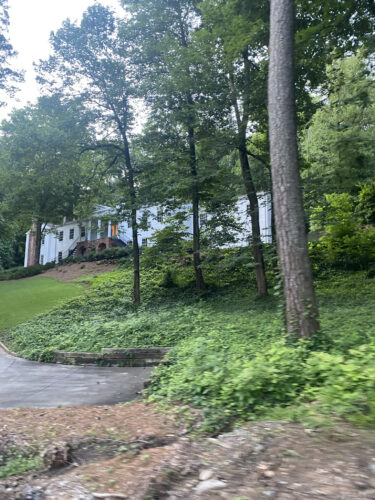 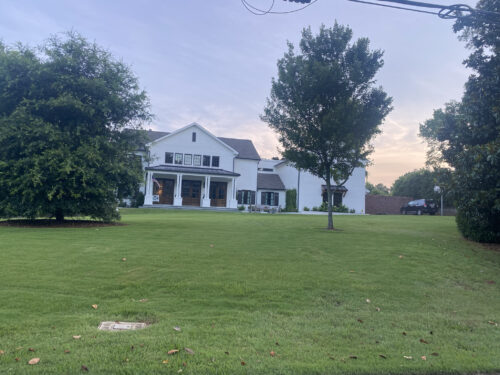 The following morning we had a quiet Retreat. The message was about living prayer, being constantly in prayer. This is a process of self- abandonment, the mystical marriage. Our will is conformed to the will of God. We follow God’s will by taking steps of faith until we reach the point of trusting God. Fr. Leonard used St. Francis as an example: St. Francis was prayerful, patient, and was filled with the love of God. His desires were pure. His will was  conformed to God; he wanted things to be very simple. The Retreat was so much deeper than I could ever express.

We had invited our sister Jo, but she was preoccupied with her business and said that she would meet us for dinner instead. Though the retreat was not meant to expose our flaws, I felt as if I had been gently shaken to make me realize what the love of God is all about. I realized the sacrifice our sister Jo made driving more than five hours each  way to be with us. We had a wonderful dinner and after breakfast Jo was headed back home.

Since this was a Retreat, we spent several hours praying for the needs of others. When the Lord  showed me someone’s face, I’d text that person to tell him that I was praying for him. It was a powerful experience to sit in the chapel with the exposition of the Holy Eucharist. We did the same thing on Friday; we attended Mass and stayed for Adoration.

I don’t know how I caught this virus, but I suspect that it was while waiting for the storm to pass because we sat for two hours on the tarmac. The flight attendant kept cutting off the air conditioner, leaving us to breathe stagnant air. I missed my connecting  flight. I needed to attend my  cousin Sandy’s  funeral. At that time the only symptom I had was a dry throat, which I wake up with every morning. At the funeral I hugged and kissed everyone.

Later that day I had to take my grandson to his basketball game, I isolated myself from everyone in the crowd. I noticed that I coughed a few times but didn’t think anything of it until it was dinner time. Something was off because I had no appetite. The next morning I tested positive for COVID. It did not take long for the virus to do a number on me. I thought the pain was too much! Every day something became worse; every day something new was added to is already diabolical virus. I felt as if I had layers and layers of fever and back pain for which I never got any relief. This continued for nine days. On the tenth day the Devil sucker punched me in the gut. I could not hold anything down and then the cough. I forgot to mention that Mike, too, also tested positive for COVID. Since Mike was vaccinated his case was mild.

I understand why God allowed Mike to get COVID. He was my caregiver, but when things got rough he struggled. My cough was so loud that I sounded like my neighbor’s dog barking at an intruder. This was always followed by tremors or out-of -control shaking. The coughing and gasping for air freaked Mike out. Dr. Rudkin, one of my son’s friends, stopped by to drop off a pulse oximeter to check my oxygen level. He said that if it dropped below 90 I needed to go to the emergency room. From one night to another, when my oxygen dropped from 93 to 83, I knew I was in trouble.

My primary doctor was helping me through virtual visits and by prescribing medications, but the Devil wanted more of me. He had me in a head lock, and when I could no longer pray, I cried.

I was in a battle for my health; this was a personal, spiritual conflict and I knew what I was up against. You see our battle is not against flesh  and blood but against rulers, powers and principalities. I needed an army to fight this supernatural war, and they geared up and ran into the battlefield to bring Satan and his minions down.  This is what God’s army does when a general is down. Thank God for my faithful army.

Battle Against Evil. 10 Finally, draw your strength from the Lord and from his mighty power. 11 Put on the armor of God so that you may be able to stand firm against the tactics of the devil. 12 For our struggle is not with flesh and blood but with the principalities, with the powers, with the world rulers of this present darkness, with the evil spirits in the heavens. 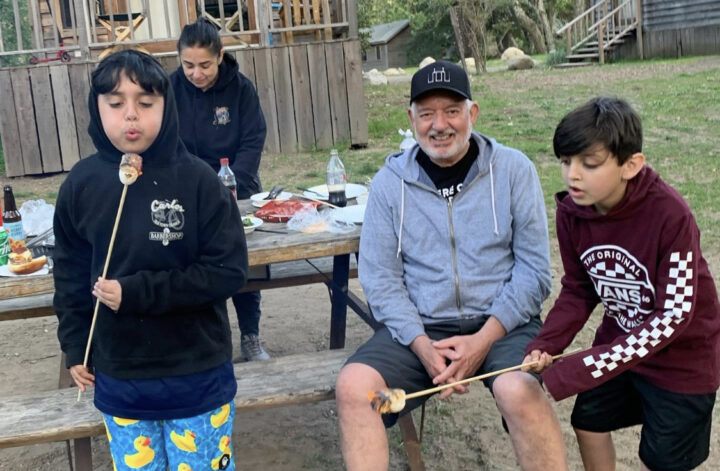 Alleluia, We Survived Our Camping Trip