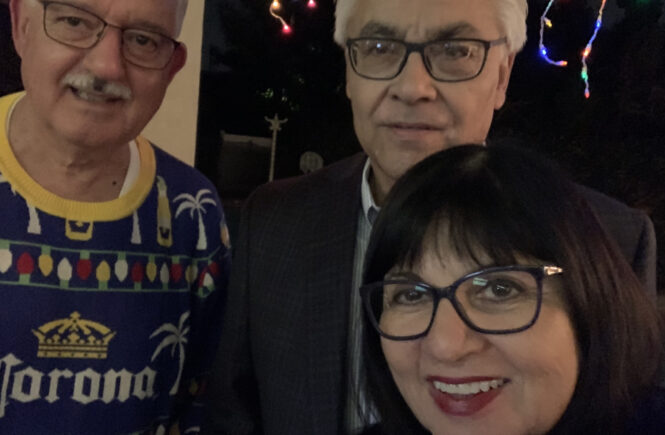 On January 4, 2021, Anthony Estrada breathed his last. Surrounded by his son, Marcus, his sisters Vicki, Caroline, and Elsie; his brother, Jess, and Jess’ wife Dawnee; nieces Candace, Cerissa, and Melissa; Lorrie, his former wife, and the caregiver.  By the time Monsignor King arrived at the home of his sister Vicki, Anthony was restless. Monsignor King spoke in a loud voice to get Anthony’s attention. “Anthony, this is Monsignor King, I’m here to absolve you of your sins and lead you into heaven.”  Anthony turned to face toward the  Monsignor and heard the prayer of the last rite. Together as a family, they prayed. After the prayer, the family felt peace and Anthony’s spirit was calmed.

Our family considered Anthony as part of our own. Mike met Anthony while he was in the tortilla business. We needed to purchase a fryer, and Anthony’s family had one for sale. This first encounter was the beginning of a brotherhood that was never broken.

Back in the day before Mission Foods took over the tortilla industry, many small family-owned businesses happily co-existed. The competition was friendly, but the friendships made along the way endured all the mergers and takeovers of the giants in the industry. These tortilleros became a fraternity and have always remained friends. Mike and Anthony were part of this group.

The last time we saw Anthony was in December of 2019. Anthony was in town to pay his last respects to Alfred, one of the circle of friends they had from the tortilla industry. Our friend stayed as a guest in our home and took part in our annual Christmas party. I remembered and regretted  making him a judge of the Tamale Contest. Anthony was a talker, and if you were lucky you could get in a word or two. There are rules to the contest, which I personally go over with each judge: No talking was the main rule. As the contest proceeded, Anthony never once kept his opinions to himself. He was hilarious, and his remarks influenced the other judges. I held him accountable for my loss that year, but we would never have it any other way.

Anthony, Our Friend and Brother

The first time I met Anthony was also because of a business venture. He had invited us to Pueblo, Colorado. Mike did all the planning, so I was in the dark about our accommodations. Anthony picked us up from the airport and we headed to his house. He gave up his master bedroom for us,  we had dinner, and then he disappeared. It was not until the wee hours of the morning that we heard him come in. At that time, our kids were four and two years old.  In the morning I got up and got the kids ready for the day. Anthony was sprawled on the couch, sound asleep. I needed to feed my kids but there was not a drop of milk for the cereal. We did not have a car because Anthony insisted on chauffeuring us around.  I called Mike to the room. “We can’t stay here! We don’t even have a car! and the kids are hungry! You need to fix this, we need to get a hotel!” Mike calmed me down as best as he could and woke Anthony up.”I bet you guys are hungry, I’m going to take you to the best restaurant in town,” Anthony promised. I was relieved but when he pulled into a driveway of a home with a sprawling yard, I said. “Why are we stopping here?” He said,”Oh, you are going to eat the best food Pueblo has to offer.”  This was his mother’s home. From this day forward, this family has warmed our hearts. We endured four days with Anthony and got to know a man with a great heart.

This was our friends attire: a crisp white shirt, a smart sports jacket, slacks, and fancy shoes. As soon as he got off the plane, he needed carnitas tacos with the works. He’d spend a good chunk of money by the time we left the local Mexican market. Chicharrones, tripas (cow guts), Mexican bread, and whatever else he could get ahold of. Then the feasting began. Anthony would talk throughout the meal. He loved elegant meals as well, and our many dinner ventures were filled with so much laughter because no one could outtalk his stories. Anthony was the guy who would greet you with a friendly shoulder rub; not one person was spared this. When he read something, he would bring the paper right up to the edge of his glasses, bending down his head to focus. Mike and our son Mikos were “cuz” and the girls were all referred to “honey.” He could never pronounce the word what; it was always “wha.” But in the end, it was always the lavish, descriptive stories that he shared that we will remember most.

When we were younger, we took several vacations with the Estrada family. We skied Vail and Deer Valley. Mike and I would always splurge one night to eat at La Caille, a beautiful French restaurant  tucked in the Wasatch Mountains of Utah. I will never forget the dinner when we all had a little too much of the high altitude mixed with spirits; we were referring to the chic restaurant as “La Calle, which in Spanish means the street.” Our memories are all filled with love, and our families will forever be connected because of Anthony.

In early November, Anthony was diagnosed with diabetes. He decided to take better care of himself and started eating healthier and walking. His feet started to swell, and he attributed that to the diabetes, but he also had a nagging stomachache. In the emergency room of the hospital after several tests were run, tumors were discovered. Anthony never made it to his appointment with the oncologist.

Our family, due to COVID-19, cannot attend his memorial service, but we wanted to be with this incredible family to support them in their great loss. Anthony, you leave us with an empty hole in our hearts. All who knew you share this grief, and you will be greatly missed. Rest in peace, my brother.

My Prayer: Dear Lord, I find it so difficult to believe that Anthony is no longer with us. Give us comfort in our grief knowing that Anthony and his son Arron are together. We pray for the repose of their souls. Most merciful God, we lift up Anthony’s family, bring them to a place of understanding knowing that You are there in their midst.