The surprise planning started in February of last year. In April, I noticed several emails from Rome confirming hotel reservations. Curiosity got the best of me, and the investigation revealed the anniversary gift that Mike worked so hard to keep secret.

Mike’s goal was to have a romantic dinner in Rome. At first, I thought the weather in January would be a deterrent, rain, and possibly snow, and then I questioned the time frame? My daughter Sonja snapped me back into reality, reminding me of an ungrateful behavior. She was right, and I was humbled yet again.

Mike was nursing a cold, and the flight up was miserable, coughing and sneezing the entire way. He was focused on the trip and graciously stuck to the travel plans. Upon our arrival at the Roma Cavalieri, I mentioned that we were celebrating our 45th wedding anniversary.  Maria our hostess shared our excitement and upgraded our room with a view of the Vatican.

Monday was a day of exploring the familiar site of the grand city. Walking for miles with few visitors in the city makes you feel like a local. The women so chic, no tennis shoes, no workout clothes just beautiful puffy coats, designer handbags, and leather shoes or boots. Ladies, leave your bulky Uggs at home.  I caught a reflection of my 7 year old leather coat and felt a little outdated. I mentioned to Mike “Am I the only one wearing leather?” He laughed in agreement.  I never purchase clothes in Europe because of expense and the sizing is really insulting. For instance, if you are a size 12 in the states, here it would be in the fifties. The only thing that I buy here is shoes, and at 50% off, who can resist. Yes, they have the inexpensive brands like H&M, but these are on the main streets like Via del Corso. The boutiques along the small cramped cobblestone streets each uniquely selling one of a kind fashions and every thing was on sale. Soft American music was playing in the background of every business we entered, everywhere we went the American music followed us.

Our dinner experiences were great for Mike, but not for me, ordering the wrong thing was a constant, Mike is a foodie so he knew exactly what to order. Towards the end of the trip, as if I were a child he took over ordering my meals. The Romans love octopus, truffles, and artichokes must be in full bloom because most pasta was laced in the odd vegetable. The bread, stuffed with olives and breadsticks sprinkled with sesame seeds are delightful and plentiful.  The red wines, especially the Chiantis did not disappoint, I rarely drink wine with dinner but here it’s a different experience.

Months before the trip I made arrangement for the audience with Pope Francis by visiting: www.visitorsoffice@pnac.org. Via email, we were instructed as to where to pick up the tickets once in Rome. A stones throw away from the Trevi Fountain is the Pontifical North American College, a hidden gem behind massive dark wood doors. Greeted by a young seminarian with a clipboard and list, he checked off our name and led us into another area. A beautiful fair skinned Sister Anne warmly welcomed us, and schooled us on how to get good seats to see the Pope. With a map of the Vatican and a picture of the room, the nun pointed out where to sit. The winter audiences have its advantages because of the smaller size of the crowds as the meeting are held indoors. The nun told us to arrive early; 7:00 A.M. for the 10:30 visit but my advice is to arrive earlier to secure your spot. Sister Anne said that they had just received 2,000 rosaries and asked if we wanted some. After sharing with her about the ministry, she gave us 200 rosaries and Mike carried them to the Vatican for the Pope to bless. These were the only religious items that I brought back, and they were free. 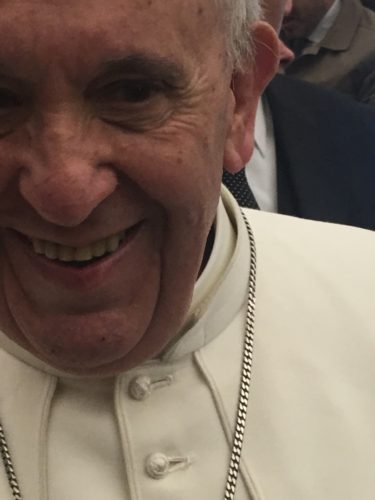 We made our way the Cathedral of Holy Cross In Jerusalem. As many times that I have been to Rome this was the first visit to the cathedral that houses treasured relics that St. Helena had excavated. The discovery of three crosses and nails and the signs which reads in three languages, Jesus of Nazareth, King of the Jews found  (Luke 23;19-20). In the small chapel to the left of the main altar is where  these religious  artifacts are kept. As you walk in you can feel the power of God’s holy presence. Mike and I had this experience all to ourselves. I took pictures only to discover the universal sign of no pictures as we were exiting. From there we walked to St. John Latern, one of the four major basilicas. St. Helena brought back the passion steps that Jesus walked on from the Palace of Pontius Pilot. The steps are housed in a chapel across the street from the main basilica. The chapel was almost empty and on our knees we climbed to the top of the 28 Scala Santa (Holy Stairs). I took my time praying every step of the way. I prayed for Mikos and Jenny, Sonja and Russ and for the rest of our family and friends, another favor and glorious experience.

Our hotel had surprised us with a bottle of champagne over ice and mini desserts. I set my handbag next to the ice bucket and went to bed. We needed to be at the Vatican early so it was not until we were getting ready did I discover that water had seeped half way up my water resistant purse. Everything was wet, passports, tickets to the audience and St. Paul’s, the holy cards, iPad cover and the prayer request. I had to use the hair dryer to quickly get things dried. Papers were flying everywhere in the bathroom. My Manderina Duck purse now had a noticeable flood line, and was still wet by the time we arrived at the Vatican.

Mike and I sat tandem, and just like Sister Anne promised it was the best place. We were told that the Pope is an early bird and that he could show up anytime between 9:15 – 10:00 AM, so we were all ready for the photo op. I cannot explain why my husband decided to get up and stretch, but when he did every single person got up as if the Pope had made is entrance. I looked at Mike and asked him”Why did you get up?” He just smiled and the rest of the 45 minute wait was on our feet thanks to Mike. Once the Swiss Guards walk to take their stations, we all knew what was to follow. It’s to your advantage or disadvantage  to have a child near you because the Pope always takes time to bless a child. The two Brazilian children next to us were asleep the entire time, but when the Pope passed by, sure enough he stopped to bless them. That is how I got my close up of the pope. It was mayhem, and because we had good seats we were victims of human trampling. I could not move an inch and those Brazilian kids were all over me almost like I was giving them a piggyback ride.

I have yet to experience anything more beautiful than the service at St. Paul Outside the Walls. The world can have Hollywood, to me there is nothing more elegant than a Papal procession. The distinct walk of the Swiss Guards, their red plumbed helmets, the white ruffled collars the brilliant colors of crimson, gold and navy blue in all chivalry.  This service was beyond my expectations. The acoustics at St. Paul’s was as if the cantors were sitting next to you and the grand sound of the organ was piercing my heart, and moved me to tears. I prayed for our country and for the conversion of souls and I know that in all this heavenly sound God heard my prayers. Pope Francis was celebrating St. Paul’s conversion, which can be found in the Book of Acts Chapter Nine.

On our last day Mike announced “No more religious stuff today, I want to shop.” He purchased slacks (size 54, he is a 38 in the US) and I bought birthday presents for Sonja, our daughter and William, our grandson. We walked 8 miles that day, came back to the hotel to rest and then took the complementary shuttle to Harry’s Bar for dinner. I ordered the right thing on the last day. 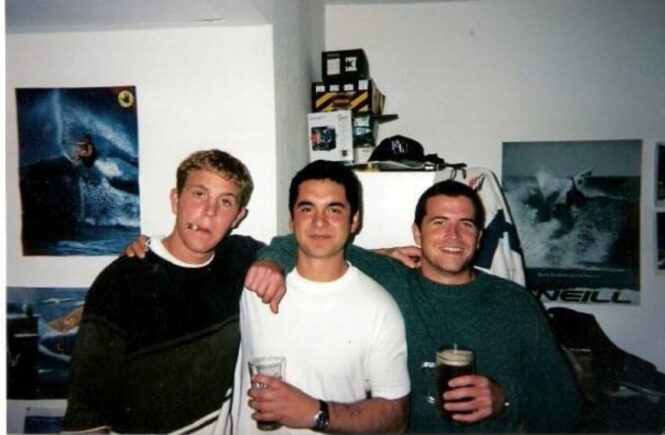