From Boys to Men

Mikos was in 7th grade when he was  initiated into manhood. Our home was always the hangout house. I remember one day when the boys came home from school talking about a Jeff, a classmate at of theirs being hit by a car that afternoon. They had no idea of the severity of the injuries. They talked about how Jeff was a prankster and that he was going to be fine. I walked into the room to explain to the boys that this was a serious matter, but the boys could not comprehend the reality of the situation. I tried to contact the hospital to check on Jeff’s condition, but because I was not family no information was disclosed. We would find out later through a mutual friend that Jeff was in intensive care. Jeff’s grave condition became worse. He was in a coma and came out of it long enough to tell his family how much he loved them, but died shorty after. Mikos and his friends were in shock to hear of the news.

I agreed to take some of Mikos’s friends to the funeral services. Mitch, our neighbor and good friend of Mikos, accompanied us to Jeff’s services.

Mitch, was my sweet friend too, he was the type of kid that grew on you, not a know-it-all, but rather a pure brilliant mind. Mitch was always visiting us. I would greet him at the door to tell him that Mikos was not home, I’d tell Mitch to come back later, but he’d talk his way into staying. “I’ll wait for him here,” he’d say. He offered to vacuum for me while he waited, he was adorably charming, and had an old soul.

Of all of Mikos’s friends, Mitch processed Jeff’s death differently, in a more mature and sensitive manner.

It was not even a month later, when a young novice driver caught the sun in her eyes and failed to see Mitch. Mitch was riding his bike to catch one of Mikos’s basketball games when he was hit by the car. On the same infamous crosswalk where Jeff met his end, Mitch met the same fate.  From our home I heard the helicopter that airlifted Mitch to the specialized head trauma department of a nearby hospital.

Mikos came home with the tragic news, but this time he understood the severity. I knew Mitch well, but had only met his parents a couple of times. Mikos wanted to go to the hospital, but that was out of the question because we were not family.

For several days Mitch fought for his life, but due to severe head trauma it was only a matter of time. Mikos came to me and pleaded for me to take him to the hospital to say goodbye to Mitch. I explained to my son that the only way that was going to happen was if Mitch’s family personally called us. Sadly the following morning, Mitch’s mother called to inform us that there was no brain activity and that we could come and pay our respects. We walked into a room filled with tears, as I touched Mitch’s arm my heart was aching for his family and what they were experiencing with this unexpected blow.

My husband Mike and Mikos along, with his friends, served as Pallbearers for their young friend. The small community of Villa Park was forever changed. A traffic signal was placed where both of these precious boys met their untimely deaths.

In my grief I wrote a poem for Mitch’s family which was read at the service:

Oh my son, the many things we’d say we’d do

I have a hard time to find this real, this true

The coldness of life has left me numb

You turn my way and hold me through this

Is it your love I can’t understand?

Or is it my life of which you want to command?

A life so young has now vanished I say

But you, Lord, will not lead me astray.

Give me faith, at times mine is shallow

I’m slow to remember you too share my pain

Yours died on the Cross

Bethlehem, The City of the Nativity 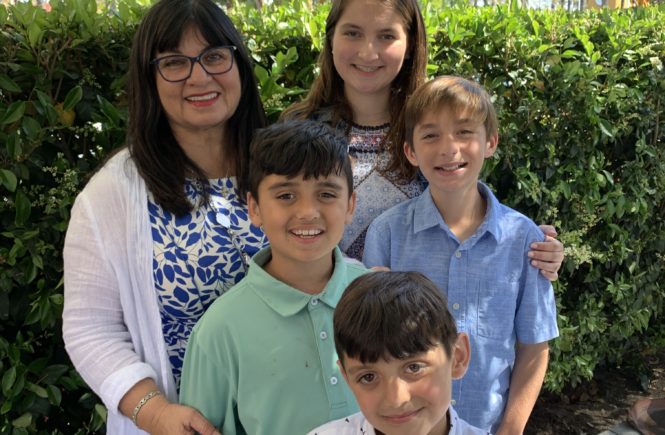